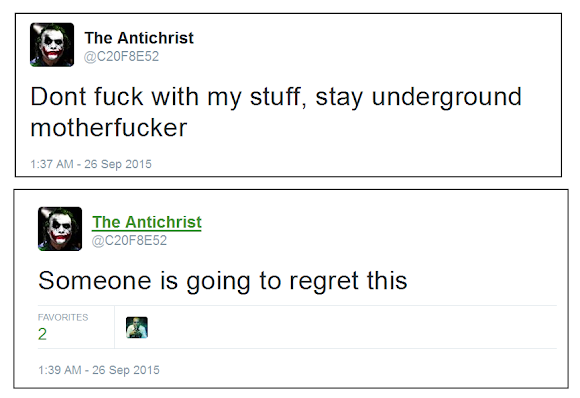 It come to our attention all of the sudden a suspected botherder was tweeting some "threatening" tweets..
Strongly showing symptoms of (self and) weak person's abusive behavior..

In a public channel this conversation was recorded. and he confessed a usage of a certain type of malware used for a botnet discussed..
We watched as the subject is making "dialogue" with others
Showing ab extra-hard effort to make impression of lame "educated image" which is obviously taking his energy too much..
The below profile report of his twitter, we logged this just in case he'll delete it (as net crook always does after exposed).
This is the PoC of the REAL characteristic of this pshyco-analysed skido botnet herder of GayFgt & Kaiten (as per self-confessed).

## A PoC of VIOLENT ATTEMPT conducted by botherder ##

Obviously the botherder doesn't like his bots being exposed, and made abusing act to expose the privacy of the victim,
a good person who was reporting every malware infection that the botherder used to infect servers, some are hitting USA:


Below is the log in IRC on how botherders and his "gangs" busted in and making a "dox drama" about the case,
which can be used as abuse evidence, contains some internet connectivity data: (ping us for full long)


What do you think. folks? The crooks was just making Cyber Bully act here :-| And he tried to fake his real personality..
See the twitter profile below to see what kind of person he really is: